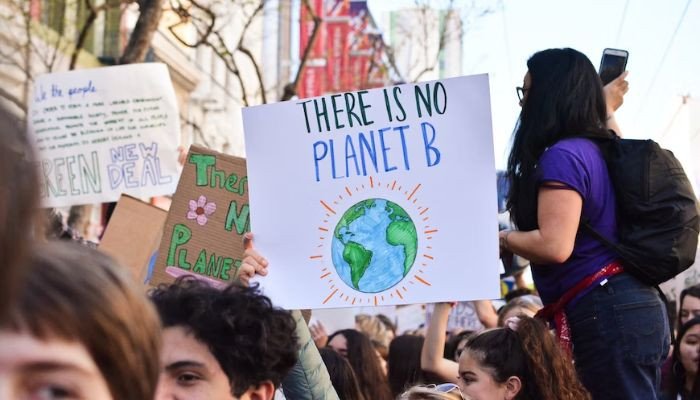 PARIS: Governments around the world must scale up climate action “or face further legal action”, an open letter from campaign groups warned Tuesday, as battles over policies to cut emissions and protect the environment are increasingly fought in the courts.

From legal efforts to steer governments to do more to curb fossil fuel pollution, to court action over companies’ misleading green claims, the number, scope and ambitions of climate litigation are expanding, say, experts, with an increasing number of cases being launched against governments.

And that will continue if they do not use the upcoming United Nations COP meeting in Egypt to substantially enhance their climate action, according to an open letter signed by lawyers from more than 20 organisations around the world.

“Governments of the world: your delay is costing lives. Strong action is needed now to protect people and the planet,” the letter said.

“If you continue to fail us, we will continue to turn to the courts to demand accountability.”

The groups said they had already launched more than 80 legal cases around the world to “compel” governments from the Netherlands to Brazil, warning that the world was on the “precipice of the most serious intergenerational violation of human rights in history”.

Research from the Grantham Research Institute at the London School of Economics this year has found that of the 2,000 or so climate legal cases filed since 1986, almost a quarter was started since the beginning of 2020.

Some 80 of these cases have been filed against national or subnational governments since 2005, the research found, with a record number of 30 new cases submitted in 2021.

Perhaps the most successful of this kind of case was environmental group Urgenda’s landmark 2019 victory in Dutch courts, which saw the government order to reduce greenhouse gas emissions by at least 25% by the end of 2020. The target was largely met.

“Climate action is a legal duty. Yet governments are failing to comply with their own laws and commitments,” said Sarah Mead Co-Director of Climate Litigation Network, part of the Urgenda Foundation, which signed the letter.

“We want to make sure that countries understand that the law is on our side.”

But legal rulings can go both ways.

In June, the US Supreme Court ruled that the government’s key environmental agency cannot issue broad limits on greenhouse gases.

Campaigners say that energy companies are increasingly turning to international arbitration to recoup investments as governments accelerate the shift away from fossil fuels.

The 2015 Paris Agreement saw governments agree to a cap on warming of well below 2C and preferably a safer 1.5C.

But the UN’s Environment Programme has said that even taking into account updated global promises to cut emissions of heat-trapping gases, the world is currently on course to warm 2.8C.