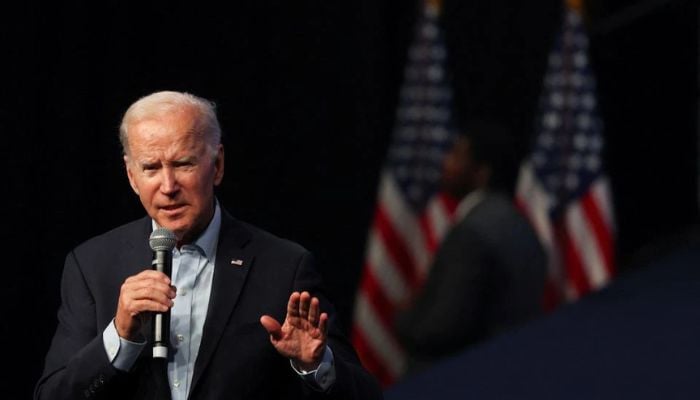 In a stark closing argument ahead of the US midterm elections, President Joe Biden on Monday warned that a Republican victory could weaken the country’s democratic institutions, while former President Donald Trump hinted he could announce another White House bid as soon as next week.

Biden’s comments reflected the deep political divide in the United States ahead of Nov. 8 elections that could see Republicans win control of one or both chambers of Congress.

“Today we face an inflection point. We know in our bones that our democracy’s at risk and we know that this is your moment to defend it,” Biden told a cheering crowd at Bowie State University, a historically Black college outside Washington.

Non-partisan election forecasters predict that Republicans are likely to pick up roughly 25 seats in the 435-seat House of Representatives, more than enough to win a majority. Analysts said Republicans also could pick up the one seat they need to win control of the Senate.

Republicans have blamed Biden’s administration for rising prices and crime, two top voter concerns. But dozens of candidates also have echoed Trump’s baseless claims of fraud in his 2020 election defeat. Some of them could end up as governors or election administrators in battleground states and play a central role in the 2024 presidential race.

Trump has repeatedly hinted that he may run for president again. At a rally to boost Republican candidates in Ohio, Trump said he would make an announcement a week after the election at his Florida estate.

“I’m going to be making a very big announcement on Tuesday, Nov. 15 at Mar-a-Lago in Palm Beach, Florida,” he said.

Despite delivering on campaign promises to boost infrastructure and clean energy, many Americans have soured on Biden’s leadership. Only 39% approve of his job performance, according to a Reuters/Ipsos poll published on Monday.

Biden’s unpopularity has made him an unwelcome guest in the most competitive races. On Monday, he spoke in reliably Democratic Maryland, where the Democratic gubernatorial nominee, Wes Moore, is widely expected to win back the Republican-held governorship.

If Republicans win the House or the Senate, that would spell the end of Biden’s efforts to get abortion protections and other Democratic priorities through Congress. It also would open the door to Republican-led investigations that could potentially damage the White House. A Republican-led Senate could also block Biden’s nominations for judicial or administrative posts.

Billionaire Elon Musk, whose purchase of Twitter and vows to loosen the reins on who can say what on the platform has led to some speculation that it could unleash a wave of disinformation, tweeted on Monday that “independent-minded voters” should vote for a Republican Congress.

If Republicans secure a House majority, they plan to use the federal debt ceiling as leverage to demand deep spending cuts. They would also seek to make Trump’s 2017 individual tax cuts permanent and protect corporate tax cuts that Democrats have unsuccessfully tried to reverse over the past two years.

Control of Capitol Hill would give Republicans the power to block aid to Ukraine, but they are more likely to slow or pare back the flow of weapons and economic assistance to Kyiv than stop it.

Trump supporters, spurred by his false election claims, have threatened and harassed election workers and voters.

An attack on the husband of House Speaker Nancy Pelosi on Oct. 28 has further raised fears of political violence. Trump called her an “animal” at Monday’s Ohio rally.

But the White House said on Monday that law enforcement had not reported any specific, credible election-related threats. The US Justice Department said it would monitor voting in 64 locations across the country.

Democrats campaigned heavily on abortion rights, counting on a backlash to a June decision by the US Supreme Court that ended nationwide abortion protections. Voters in five states will consider abortion-related initiatives on Tuesday.

“I think it should be a person’s own decision of what to do,” said Chris Gunston, 60, who voted for a proposal to protect abortion rights in Michigan, along with Democratic candidates on the ballot there.

More than 43 million Americans have already cast their ballots, either in person or through the mail, according to the US Elections Project, which tracks early voting.

Experts say it might be days or weeks before the outcome of some close races — and control of Congress — is clear.

Thus far, polling problems have not been widely reported.

In Georgia, where one of the nation’s most closely contested Senate races is unfolding, election officials in Cobb County agreed to extend the voting deadline until Nov. 14 for 716 people who had requested mail ballots but did not receive them.

Some of those who had not received their requested ballots opted to vote in person.

“I’ve had to miss a lot of classes to make sure I could come in person,” said Alyse Martin, 20, who said she travelled six hours from Washington back to Cobb County after her absentee ballot never arrived. “But I think it will all be worth it in the end.”