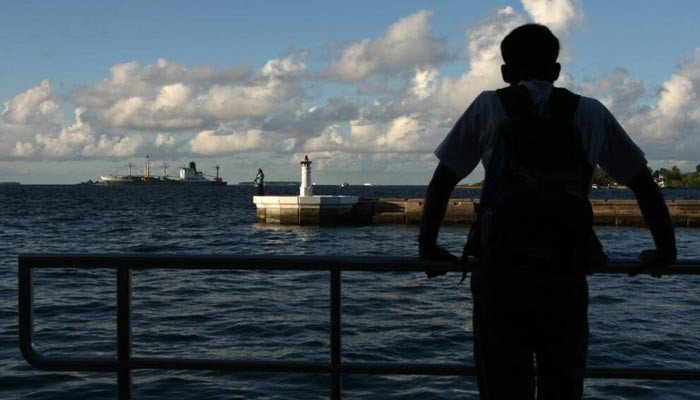 UNITED NATIONS, UNITED STATES: If rising seas engulf the Maldives and Tuvalu, will those countries be wiped off the map? And what happens to their citizens?

The prospect is no longer science fiction as global warming gathers pace, posing an unprecedented challenge to the international community, and threatening entire peoples with the loss of their land and identity.

“This is the biggest tragedy that a people, a country, a nation can face,” Mohamed Nasheed, former president of the Maldives, told AFP.

According to UN climate experts, sea levels have already risen 15 to 25 cm (six to 10 inches) since 1900, and the pace of rise is accelerating, especially in some tropical areas.

If warming trends continue, the oceans could rise by nearly one additional meter (39 inches) around the Pacific and Indian Ocean islands by the end of the century.

This is still below the highest point of the smallest, flattest island states, but rising seas will be accompanied by an increase in storms and tidal surges: Salt contamination to water and land will make many atolls uninhabitable long before they are covered over by the sea.

According to a study cited by the UN’s Intergovernmental Panel on Climate Change, five nations (the Maldives, Tuvalu, the Marshall Islands, Nauru and Kiribati) may become uninhabitable by 2100, creating 600,000 stateless climate refugees.

It is an unprecedented situation. States have, of course, been wiped off the map by wars. But “we haven’t had a situation where existing states have completely lost territory due to a physical event, or events, like sea-level rise, or severe weather events,” noted Sumudu Atapattu, of the University of Wisconsin in Madison.

But the 1933 Montevideo Convention on the Rights and Duties of States, a reference on the subject, is clear: A state consists of a defined territory, a permanent population, a government and the capacity to interact with other states. So if the territory is swallowed up, or no one can live on what is left of it, at least one of the criteria falls.

“The other thing that I argue is that statehood is a fiction, legal fiction we created for purposes of international law. So we should be able to come up with another fiction to encompass these deterritorialised states,” Atapattu added.

That is the idea behind the “Rising Nations” initiative launched in September by several Pacific governments: “convince members of the UN to recognise our nation, even if we are submerged under water, because that is our identity,” the prime minister of Tuvalu, Kausea Natano, explained to AFP.

Some people are already thinking about how these Nation-States 2.0 might work.

“You could have land somewhere, people somewhere else, and government in the third place,” Kamal Amakrane, managing director of the Global Centre for Climate Mobility at Columbia University, told AFP.

This would first require a “political declaration” by the UN, then a “treaty” between the threatened state and a “host state,” ready to receive the government in exile in a kind of permanent embassy. The population, which might be in that state or even a different one, would then have dual nationality.

Amakrane, a former UN official, also draws attention to an ambiguity in the Montevideo Convention: “When you speak about territory, is it dry or wet territory?”

Humans ‘are so ingenious’

With 33 islands scattered over 3.5 million square kilometres (1.3 million square miles) in the Pacific, Kiribati, tiny in terms of land area, has one of the largest exclusive economic zones (EEZs) in the world.

If this maritime sovereignty were preserved, then a state would not disappear, some experts say.

While some islets are already being engulfed as shorelines recede, freezing the EEZs would preserve access to vital resources.

In an August 2021 declaration, the members of the Pacific Islands Forum, including Australia and New Zealand, proclaimed that their maritime zones “shall continue to apply, without reduction, notwithstanding any physical changes connected to climate change-related sea level rise.”

But even with rising ocean levels, some would simply not consider leaving their threatened country.

“Human beings are so ingenious, they will find floating ways… to live exactly in this location,” says Nasheed, the Maldives’ former leader, suggesting people could resort to floating cities.

How these states would find resources for such projects is unclear. The question of financing the “loss and damage” caused by the impacts of global warming will be a burning issue at COP27 in Egypt in November.

Even as experts like Amakrane defend “the right to remain” for people who don’t want to leave their heritage, he adds: “You always need to have a plan B.”

In this vein, he has called for launching “as soon as possible” a “political” process to preserve the future of uninhabitable states, “because it gives hope to people.”

Otherwise, he warns, the current state of uncertainty “creates bitterness and disarray, and with that, you kill a nation, a people.”