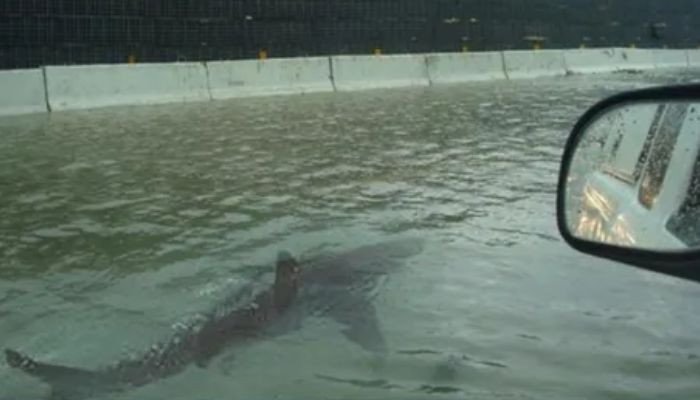 Hurricane Ian on Wednesday began lashing Florida’s Gulf Coast with powerful winds and drenching rain, prompting authorities to tell residents it was too late to evacuate as the eye of the storm inched toward shore with close to Category 5 power.

Video images of the storm’s fury on local TV and social media showed floodwater nearly reaching rooftops in some communities, sweeping away cars, and the ruins of homes as palm trees were bent almost in half.

One of these videos posted on Twitter showed the shocking sight of a fish swimming in the flood water right in the middle of the road, and the user who posted it said it was a shark.

While the user claims it was a shark, the image is too unclear to decide what fish it actually was.

Some social media users have commented that they feel scared after watching the video, while others have said that the clip was “fake”.

Regardless, local residents told Newsweek that they had been seeing various dangerous animals like alligators and snakes in the water.

The Florida Fish and Wildlife Conservation Commission (FWC) warned people of the appearance of more animals like snakes and bears.

“Remember to stay alert and give them space,” the statement read.

That was just shy of a Category 5 designation, which is the most severe storm classification with sustained winds of at least 157 mph, though Ian was expected to weaken a notch after hitting land, the centre said.

More than 200,000 homes and businesses were without power in Florida midday on Wednesday, Governor Ron DeSantis said, adding that number was a “drop in the bucket to what’s going to happen in the next 24-48 hours.”