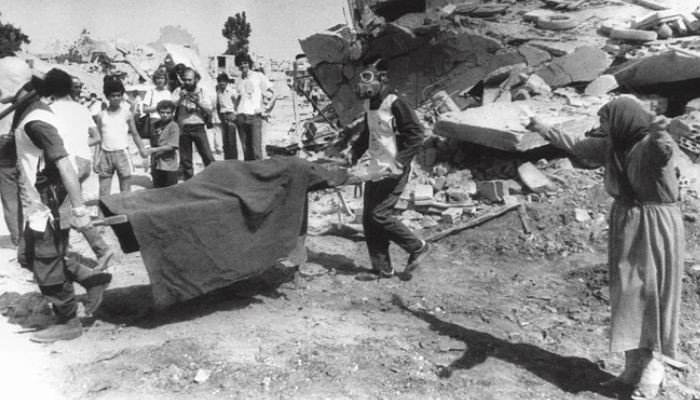 BEIRUT: Forty years after Christian militiamen massacred Palestinian refugees and Lebanese nationals in the country’s Sabra and Shatila refugee camps, the horrors of the tragedy remain seared into survivors’ memories.

Najib al-Khatib, whose father and 10 other family members were killed in the massacre, still remembers the stench of corpses.

It “lingered for more than five or six months. A horrible smell,” the 52-year-old Lebanese survivor said.

“They would spray chemicals every day, but the smell stayed,” he told AFP from the Sabra camp for Palestinian refugees, where he lives with his family.

From September 16 to 18, 1982, Christian militiamen allied with Israel massacred between 800 and 2,000 Palestinians in the Sabra and Shatila camps on Beirut’s outskirts. They also murdered at least 100 Lebanese and some Syrians.

Israeli troops, who had invaded in June that year as Lebanon’s civil war raged, sealed off the camp while the militiamen went on their killing spree, targeting unarmed civilians.

Camp residents have been readying to mark the massacre’s 40th anniversary on Friday.

“Until today, the smell is still in our heads — the smell of the dead,” Khatib said.

Khatib walked down an alleyway in the impoverished Sabra camp where he witnessed the atrocities four decades earlier.

“This is my grandmother’s house. During the massacre, it was full” of dead bodies, he recalled. “They were piled up here. Horses and corpses, all on top of each other.”

“This area was full of people they killed,” he said.

One of Khatib’s most harrowing memories was finding his father’s body at the door of his house.

“He was shot in his legs,” he said. “They had hit him in the head with a hatchet.”

Despite global outcry, no one has ever been arrested or put on trial for the massacre.

It came just days after the assassination of Lebanese president-elect Bashir Gemayel — seen as a hero by many Lebanese Christians but hated by many in Lebanon for his cooperation with Israel.

In Israel, an inquiry found a number of officials, including then defence minister Ariel Sharon, were indirectly responsible.

It laid blame on Elie Hobeika, intelligence chief of the Lebanese Forces — a right-wing Christian militia — for the killings.

The LF, then allied to Israel, has maintained silence, never responding to the accusations.

A group of survivors tried to launch a lawsuit in Belgium against Sharon, but the court threw out the case in September 2003.

Umm Abbas, a Lebanese resident of Sabra who witnessed the massacre, recalled the “unimaginable scenes” that have gone unpunished.

“What did I see? A pregnant woman who had her baby ripped out of her stomach, they cut her in two,” the 75-year-old said.

Another woman, “she was also pregnant, they ripped the baby from her stomach too”, she said.

Sitting in an alley, Umm Abbas recalled bulldozers scooping up dead bodies and dumping them on top of each other.

“They put them all in a deep hole, I saw them,” she said.

Survivors mark the massacre every year, some visiting the graveyard in Sabra where many of the victims were buried.

A simple stone memorial pays tribute to the “martyrs” of the massacre.

Palestinian Amer Okkar prayed at the site, where the makeshift graves still bear no tombstones.

“We found everyone slaughtered on the ground, in all the alleyways and along this street,” the 59-year-old former militant remembered.

“We found pills and machetes and hashish and drugs on the ground — no one could kill like that unless they were on drugs,” he said.